Healthcare is ever-changing, we look at the latest trends to take hold of the digital healthcare industry.

Take a quick look at our summary of the top 5 trends, make sure you read the full article below!

Healthcare is an ever-changing industry, and with a constant influx of money and improvements being made globally, it’s no wonder technology is transforming the way patients are treated. Digital healthcare developments are on the rise and they aren’t set to stop! We look at the latest trends to take hold of the digital healthcare industry.

The benefits of telemedicine for patients and providers have been widely reported for primary care, but what about speciality care? A recent report by the Association of Medical Colleges found that the United States could see a shortage of up to 120,000 speciality physicians by 2030 due to an ever-increasing population, which would impact patient care across the nation – this has provoked providers into implementing digital healthcare programmes to prevent overcrowding in waiting rooms and delayed wait times for patients.

Hospital systems are a great example, it’s estimated that 76 per cent of hospitals are now using telemedicine services, and one company looking to capitalize on the increased demand is Eagle Telemedicine. The physician-led group aims to bring the specialist to the patient, rather than transporting the patient to the specialist, all via telemedicine. Eagle does this by providing access to world-class neurologists, cardiologists and intensivists to hospital networks in underserved communities.

Mental health is another area which is expected to see a radical change; according to Zereana Jess-Huff at American Well “every year, nearly one in four adults will deal with a mental health disorder, yet less than half of these individuals will actually receive treatment.” This statistic can be partly explained by a number of factors – the provider shortage, difficulty accessing care and stigma associated with the conditions. Many believe that telemental health can bridge the gap with the aid of pro-government initiatives like the Veterans E-Health & Telemedicine Support (VETS) Act of 2017, which provides more accessible care to veterans, and bars states from denying or revoking a physician’s license for using telemedicine across state lines.

According to Vinod Khosla, co-founder of Sun Microsystems, “it’s estimated that machines will eventually replace 80 per cent of what physicians do.” Khosla argues that machine learning will be more efficient, cheaper and a more accurate diagnosis tool one day.

While these comments will no doubt be met with horror from the medical community, it does make sense that check-ups, testing, diagnosis, prescription and behaviour medications can be done better by sensors, passive and active data collection, and analytics.

This point has been proven by Babylon Health who recently conducted a study that demonstrated that their AI-powered chatbot has demonstrated diagnostic ability that is “on-par with human doctors”. Babylon’s AI was tested against seven “experienced” primary care doctors and scored 80 per cent in its diagnostic capabilities, while the seven doctors achieved accuracy ranging from 64 to 94 per cent.

Despite this, many are still sceptical, and it is with good reason. The output of AI is only as good as its human input, whether it’s the breadth of the data set the algorithm has been exposed to, or the fundamental code used to create the programme. When programmers do not understand the nature of a disease, there is an increased likelihood for false positive and false negative errors to occur.

This was highlighted in a recent case involving two mental health chatbots, Woebot and Wysa. These mobile applicants both required updates after failing to recognise reports of child sexual abuse, eating and drug disorders.

Despite the wide range of issues AI brings, and the lack of patient satisfaction of being diagnosed by a chatbot - the eye-watering levels of funding and provider shortages make a compelling argument for widespread adoption.

Increased use of synthetic patient records

In 2009, The American Recovery and Reinvestment Act of 2009 was born. Part of this act mandated that healthcare providers had until January 1, 2014 to convert and prove the conversion to electronic medical records.

While many anticipated capitalizing on this big data for innovation purposes, they didn’t consider that the data is typically spread across multiple electronic health record (E.H.R.) systems and to get a complete picture of a patient, providers must merge the data.

For companies harnessing the data it often comes with it risks – privacy, compliance and ethics to name a few. Private companies who are tasked with providing predictive analytics found it extremely costly to acquire patient information and the relevant accuracy of data has been questioned. As a result, many people are now turning to synthetic patient records.

This a relatively new term but it essentially involves deep learning techniques to generate new patient records for research purposes. The techniques are even used to create images and uncover relationships in large quantities of unlabelled data.

One company committed to fuelling healthcare innovators’ hungry appetite for big data is MITRE. They have created a free open source product called Synthea™, a contraction of "synthetic" and "health". Synthea generates synthetic patients and their medical histories based on simulated incidences. MITRE hope that the use of this data will better-assist companies all over the world to provide predictive analytics and more effective decision-based support tools to healthcare providers.

While this has clear merits, it also comes with some potentially catastrophic risks. Many companies producing artificial intelligence-powered chatbots are using synthetic data as their bed rock for proof of concept. This is obviously a major concern because the output of AI is only as a good as its human input, and if there is no human input due to it being synthetically created then who is to blame when it goes wrong?

With the meteoric rise of mobile medical apps (mHealth), fitness trackers and software to support clinical decisions, the Food and Drug Administration (FDA) were tasked with launching a more effective plan to protect consumers. In early 2019, the FDA Digital Health Action plan was born and this promised to foster digital health innovation while continuing to protect and promote the public health.

Part of this plan included the Software Precertification (Pre-Cert) Pilot Program which involved nine guinea pig companies. The basic goal of the Pre-Cert programme, which sets it apart from previous FDA regulatory ventures, is that it focuses not on products but on firms and developers. If the FDA is satisfied that the firm is responsible and safe in its development, then it won't need to regulate each product from that firm.

One participant in this program, Pear Therapeutics Inc, recently announced the launch of the first and only FDA-authorized prescription digital therapeutic software for Substance Use Disorder (SUD). reSET aims to significantly improve abstinence in substances of abuse and treatment retention compared to standard of care alone.

In the coming months, we will also see the finalized plan of the proposed regulatory framework for artificial intelligence/machine learning (AI/ML) based products. This should certainly improve the FDA’s existing methods for dealing with AI – at present, the FDA generally require manufacturers to resubmit clearance when major modifications are made to the software – obviously for software which constantly learns and self-improves, this has proved to be very inefficient.

In the UK, we’re also seeing changes to government schemes to stimulate digital adoption within the NHS. Beginning April of this year, the NHSX will take over many of the digital responsibilities that currently sit with NHS England. This will include publishing a new code of conduct for how the NHS should partner with digital health companies, including how it extracts value from giving industry access to NHS patient data.

Funding to slow, but M&A activity to rise

After a record-breaking year in 2018, it’s unsurprising that in Rock Health’s latest report only $986 million was invested across 61 digital health deals in the first quarter of 2019. By comparison, that’s a little more than half of the $1.6 billion raised in Q1 2018. It’s also at about the same level as Q1 2017 funding and 31 per cent below the funding secured in Q1 2016.

On the flip side, mergers and acquisitions activity has started off with a bang in 2019, there were seventeen deals in Q1. The quarter included a number of consolidation deals in niche digital health markets, such as AbleTo's acquisition of Joyable and Teladoc growing their international presence with the acquisition of Médecin Direct, which provides confidential medical consultations via phone and internet in France.

Digital innovation is transforming the face of healthcare across the world, and these trends are just some of the opportunities available. As always, innovation brings opportunity but also new risks, and traditional healthcare policies may not cover these. CFC’s bespoke policy for digital healthcare organizations is unambiguous in its coverage intent, and bundles together key exposures. Contact us to learn more. 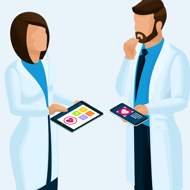 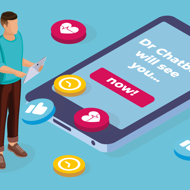 The evolution of digital health: Dr Chatbot will see you now 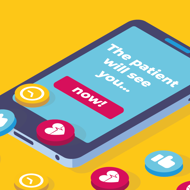