A $5m revenue software developer, established in the 2018, provides bespoke operations management software to businesses. There are hundreds of competitors
in the software developer’s industry sector but a small number of large corporations dominate and monitor the marketplace.

One large corporate, who holds a significant patent portfolio in process automation technology, sent a cease and desist letter via email to allege the software  developer was infringing one of their patents. The software developer had CFC’s intellectual property (IP) insurance which provides covers for the defense of infringement claims, contractual indemnities, loss of IP rights and loss of profit. CFC also has a dedicated intellectual property insurance team, made up of expert IP underwriters and backed by a panel of specialist claims adjusters and risk management partners.

The defense part of the policy will cover the costs of defending against allegations of infringement by a third-party and can also cover the out of court settlements, or damages awarded by a court, as a result of the claim. Defense costs can often be substantial due to the complexity of IP litigation and expertise required by lawyers.

The insured worked with CFC’s claims handlers to appoint a suitable legal representative. Initially the software developer considered using an IP lawyer they had used previously, however CFC’s claims team were able to recommend three additional law firms to ensure the software developer had the best legal representation to choose from. In this instance, the insured selected one of the recommended law firms, because they had the most extensive experience in handling patent infringement disputes in the relevant legal jurisdiction.

The software developer had many defensive options available, which included attempting to argue the competitor’s patent is not valid; arguing that they are not infringing the patent or attempting to reach a commercial license agreement with the competitor. All of these defences could have been valid and are indemnifiable on their IP insurance policy.

The insured was keen to resolve the dispute as soon as possible to keep their business disruption to an absolute minimum. Not only were they concerned about having their core product under review, but they also didn’t want the competitor to commence infringement proceedings against any of their customers because it could cause customer experience issues and ultimately damage their reputation.

Together the parties were able to apply a negotiation strategy to push the competitor towards a settlement agreement.  After four months of negotiations,
the insured’s legal representative negotiated on the extent patent infringement occurred and a reasonable terms of a license agreement going forward. The
insured secured a license which allowed them to continue selling their software products to their existing customer base, as well as new customers with no further
restrictions. The IP insurance policy paid out approximately $250,000, of which around $100,000 were legal expenses and $150,000 were a settlement payment to reflect the period and extent of patent infringement. 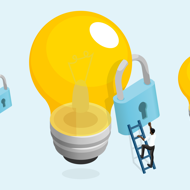 Non-practising entities: How to protect a business